Have a question about water? Ask us and we’ll poll our experts. Our members have decades of experience and knowledge about water resources and they are eager to share it with you. Post your question below and we’ll find the answer.

What is the source of drinking water in your state? Can you send a graph from ten years to now from changes in water level from reservoir? Is there pollution if so why and where is coming from? How is this affecting the steam flow?

Thanks for your question.

Mississippi gets over 90% of our drinking water from groundwater sources. Your other questions apply to streams and reservoirs, of which Mississippi has hundreds. You can obtain much of the information you request by visiting the Mississippi Department of Environmental Quality website.

Does Jackson, Ms. have an aquifer in the region?

There are typically three major aquifers available for water supply in the Jackson Metro area.  The shallowest groundwater source is the Cockfield aquifer, the most widely used aquifer in the area is the Sparta, and the deepest and least used source is the Meridian-upper Wilcox aquifer.  Unfortunately, an ancient volcano underlying Jackson limits the beneficial use of the available aquifers to mostly smaller users (pumpers) who happen to be located within the city.  Since these aquifers are incapable of reliably producing the large volume of water required by Jackson’s water distribution system, the decision was made years ago to use treated surface water from the Pearl River and Barnett Reservoir for the city’s public water supply.  Of note is the fact that groundwater is the source of public water supply for all of the surrounding municipalities in Hinds, Madison, and Rankin Counties.

What is Flood Risk Reduction? What does it mean for me?

That’s an excellent question. People and government agencies use a variety of terms to describe what is being done to protect us from floods. It gets very confusing. Maybe breaking it into these pieces will help.

Fact 1: Floods are inevitable. There are many things we can do to reduce how often and how much they damage our property and endanger our lives but we can’t eliminate the threat totally.

Fact 2: We can reduce the threat from floods and that’s the goal of the projects we read about and see around us. “Flood prevention” shouldn’t be used to describe these projects, since we can’t prevent them.

Question: What is “Flood Risk”?

Answer: Flood Risk is the combination of the probability of a specific flood event (how likely that it will happen in any year) and the consequences of that event. Examples of probability: a small flood that occurs nearly every year has a high probability but a rare major flood like the 1927 Mississippi River flood has a low probability. Examples of consequences: floods that overflow into unimproved swampland may produce only small damage but flooding a city can kill people and cause huge economic losses.

The figure below shows how probability versus consequences can be viewed graphically. Flooding of New Orleans is a High Risk no matter how infrequently it occurs because economic damages are huge and lives may be lost. 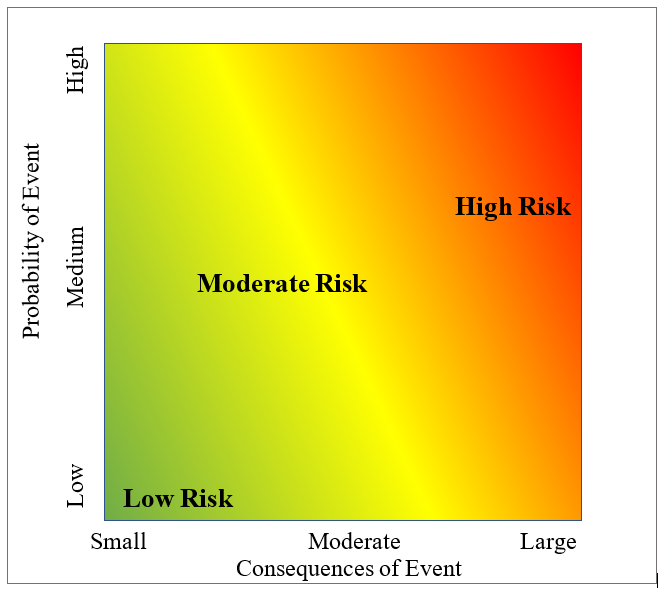 Question: How is probability measured?

Answer: Flood probability is a statistical measure, often expressed as a return interval. A 100-year-flood happens ON AVERAGE once every 100 years. Saying it that way often confuses people because they think it means that a large flood happens every 100 years. That’s not the way it works. A better way to say it is “the 1 percent flood” since there’s a 1 percent chance it will happen in any year. It can happen three months in a row or four years in a row. The 100-year average only works out over thousands of years.

Answer: They usually mean the same thing – a project that reduces the risk – probability, consequences, or both – of floods. They can’t eliminate all flooding threats but they can reduce the risk by decreasing either the probability or the consequences. Examples: A properly built and maintained levee will keep floods up to a certain level contained, reducing the consequences. A large wetland will hold more rainfall longer, reducing the probability that a heavy rain will cause flooding. A warning system that sends people to safety before flood waters reach them reduces the threat to human lives. Elevating homes and businesses reduces risk by lowering the probability of flooding damage.

Question: What are “flood zones”?

Answer: Flood zones are areas designated as likely to flood. Like floods, they are usually labeled by the probability that flood waters will enter them. The 100-year flood is used for federal flood insurance purposes, but that’s arbitrary. Important: Remember that nearly all of us live in a flood zone, whether it’s officially designated or not. We may live in a place with a very low probability of flooding, but there are no zero probability locations. Many people mistakenly think they don’t need flood insurance unless it’s required by their mortgage lender. That can be a serious mistake. See our “Ask” item about flood insurance for details.

Do I need flood insurance?

Many people think they don’t need flood insurance if their mortgage lender doesn’t require it. They may be mistaken. For guidance, read this article from Consumer Reports.org

What will be the fate of Gulf fisheries without restoration in Louisiana?

Gulf of Mexico fisheries, worth hundreds of millions of dollars, largely depend on Louisiana’s wetlands as nursery grounds. We considered whether large scale restoration efforts would benefit gulf fisheries or whether, as some suggest, it is already too late to save this resource. Read more.

Do the effects of nutrients outweigh the benefits of sediment diversions?

Most scientists would agree that, in theory, diversions can help build wetlands. However, the water brought into the system by diversions contains pollutants from upstream sources, such as nutrients. Some researchers have questioned whether the harmful effects of nutrients carried into the system by river water could cancel out the benefits of diversions. Read more.

How do I find out if my town water supply is safe?

The Mississippi Department of Health requires that your community water supply utility provide you with an annual statement reporting water quality test results. They are often included with your water bill or published in the local paper. The Department of Health also compiles data from all the state’s water utilities and publishes an annual report on their web site. Click to go there

Can you provide advice on how to clear weeds from my farm pond?

Mississippi State University’s Extension Service has a great booklet on pond management, including a section on weed control. Check it out!